Selkies and Merrow – The Sea-Folk of Ireland

When we think of Irish folklore, Mermaids may not be the first things that come to mind. Most of us associate them with the Hans Christian Andersen tale of ‘The Little Mermaid’ from Denmark, or with the beautiful but deadly Sirens from Greek mythology.

However, the cold and dark waters off the coast of Ireland are indeed rumoured to be the home of two different forms of uniquely Irish sea-folk; the Selkie and the Merrow.

The Selkie are mysterious beings – part human, part seal – that exist in the folklore of Ireland, Scotland, Iceland and the Faroe Islands.

Their legends may have originated from people dwelling in these coastal regions, observing seals perching on the rocks at the edge of the bitter northern waters. In a time long before there were any electronic devices, telling tales of seals that could change their shape to a human form would have been a wonderful way to pass the time around the fire at night.

Selkies appear as regular seals when they are in the water. However, once they come ashore, they can remove their seal skins to reveal a human form underneath. Many tales tell of Selkies coming in groups to the beaches at night and dancing by the light of the moon.

It is said that if a person could sneak to the shore and steal the Selkie’s seal skin, the Selkie was forced to remain with them, unable to return to the sea unless they could get their skin back. Selkies were said to make good wives, but they always carried with them a deep and melancholy longing for the sea.

Merrow (derived from the Irish word murúch) are the sea-fairies of Ireland, and are more like the classic mermaids that we are all familiar with. Though it should be noted that descriptions of them can vary widely, depending on the preference of whoever is telling the tale.

Merrow women are generally described as being beautiful and human-like from the waist up, but fish-like and scaled from the waist down. They are also said to have thin webbing between their fingers.

They are usually in possession of a garment such as a cap or a comb that allows them to live and breath in the water. Much like the Selkie’s skin, if this item is taken from them, they are unable to return to the sea.

Although they are capable of marrying and raising a loving family, it is said that a Merrow woman will never cease to long for the sea. If a man marries a Merrow he must hide this garment from her forever, or she will leave as soon as she finds it.

Merrow women are also known to lure men into the sea by enchanting them with their songs. The reasons they have for doing this vary; some are looking to take a human husband while others have a more sinister and vengeful purpose.

Merrow men are quite different from Merrow women and are said to be ugly and ferocious. Though there are not as many tales involving Merrow men, when they are mentioned it is usually as a dangerous and angry foe.

This is just a short overview of the rich folklore that surrounds the magical sea-folk of Ireland. Every county has its own local legend and variation and it’s a topic that has always fascinated me and stirred my imagination.

My painting is really more of a classic, fairy-tale mermaid than a particularly Irish one but I loved working on her all the same. 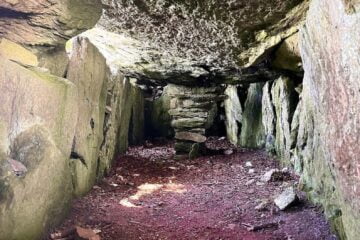 You know, for as long as I can remember I’ve always had this sort of odd bias against wedge tombs when compared to dolmens. Dolmens are my all-time favourite type of megalith, and by contrast Read more… 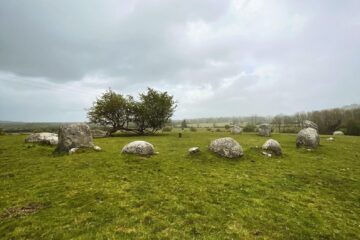 The Athgreany Stone Circle is a place that I have found myself drawn back to again and again over the years, and for good reason. It is a highly atmospheric site, adorned with a hawthorn Read more… 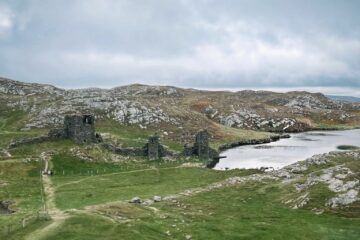 The Haunting of Three Castle Head

With the Halloween season now in full swing, I thought I’d share a ghost story with you about the haunted ruins of Three Castle Head (or Dunlough Castle) in County Cork. The Castle This medieval Read more…