The Morrígan And The Second Battle Of Moytura

I have written before about the mysterious ancient Goddess known as The Morrígan, the shape-shifting ‘Phantom Queen’ of the Tuatha Dé Danann. I want to share here a more in-depth look at her role in The Second Battle Of Moytura, a bloody battle in which she played a key part and truly lived up to her reputation as a fierce Goddess of war and fate.

The Second Battle of Moytura took place around 3000 years ago, in what is now modern-day Connaught. It was fought between the divine race of supernatural beings known as the Tuatha Dé Danann, and their oppressors who were known as the Fomorians. The Morrígan’s first appearance in this tale comes after Lugh has joined the court of King Nuada at Tara and begun to help the Tuatha Dé Danann to plan their battle against the Fomorians.

During the planning process, she helps to get the ball rolling with the leaders who would be taking part, meeting with Lugh and calling on him with an inspiring speech to go to battle and overthrow their enemies without mercy.

She then meets with the chief of the Tuatha Dé Danann, known as The Daghda. They meet around the time of Samhain, as they do every year at this time, at a pre-arranged location beside the River Unshin. When The Daghda arrives, she is standing with one foot on either bank of the river washing her genitals. The pair sleep together, and afterwards speak of the battle to come.

She tells the Daghda to strip his land at the location where the battle is to take place, and to gather together the armies of the Tuatha Dé Danann at this spot. She then tells him that she herself will go and attack the Fomorian King Indech, and take from him the blood of his heart and kidneys along with his battle zeal using her magic.

Her next appearance is just before the fight, when Lugh asks the Tuatha Dé Danann what skills they will contribute to the battle. They each speak of their abilities, and once again The Morrígan boldly promises to bring bloody destruction to her enemies.

Soon after, the battle commences. The two sides begin to fight, and after some time it eventually seems that the Tuatha Dé Danann are beginning to lose to the Fomorians. At this moment The Morrígan appears again, chanting incitement to the army and rousing them to achieve bloody victory.

After the battle, the victorious Tuatha Dé Danann are gathered together on the cleared battlefield, and The Morrígan gives two famous prophecies. The first of these is a joyful poem foreseeing a time of peace which goes as follows:

The second poem is a bleak prophecy of the end of the world, which goes as follows:

I shall not see a world that will be dear to me.
Summer without flowers, cows without milk,
Women without conscience, men not brave,
Conquests without a king,
Woods without fruit, fishless seas,
Bad judgements by old men,
False precedents of the lawgivers.
Every man a betrayer, each son a robber,
The son will enter the father’s bed
The father also in the bed of the son,
A brother becomes his own brother in law.
None will look for a woman outside his own house.
Oh evil time, son will deceive father, daughter will deceive mother.

It is clear that The Morrígan plays a vital role in the Second Battle of Moytura. Using magic, poetry and her military expertise she is a key factor in the victory of the Tuatha Dé Danann against the Fomorians. Her skill and her words inspire the warriors to fight a bloody battle and defeat their enemies. In my painting I have portrayed her presenting two palmfuls of the Fomorian King Indech’s blood.

The Cailleach of Loughcrew

Autumn Equinox is upon us my friends, and I hope that wherever you are you’re allowing yourself to pause and reflect on the passing of this celestial event. To mark the occasion I decided this Read more…

One of the fiercest goddesses of Irish mythology was the beautiful Macha. A member of the Tuatha Dé Danann in possession of powerful magic (and a wicked taste for revenge), Macha was a sovereignty goddess Read more… 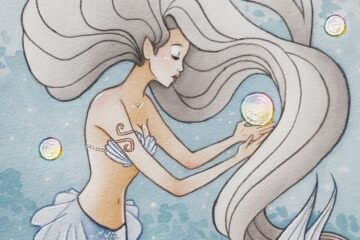